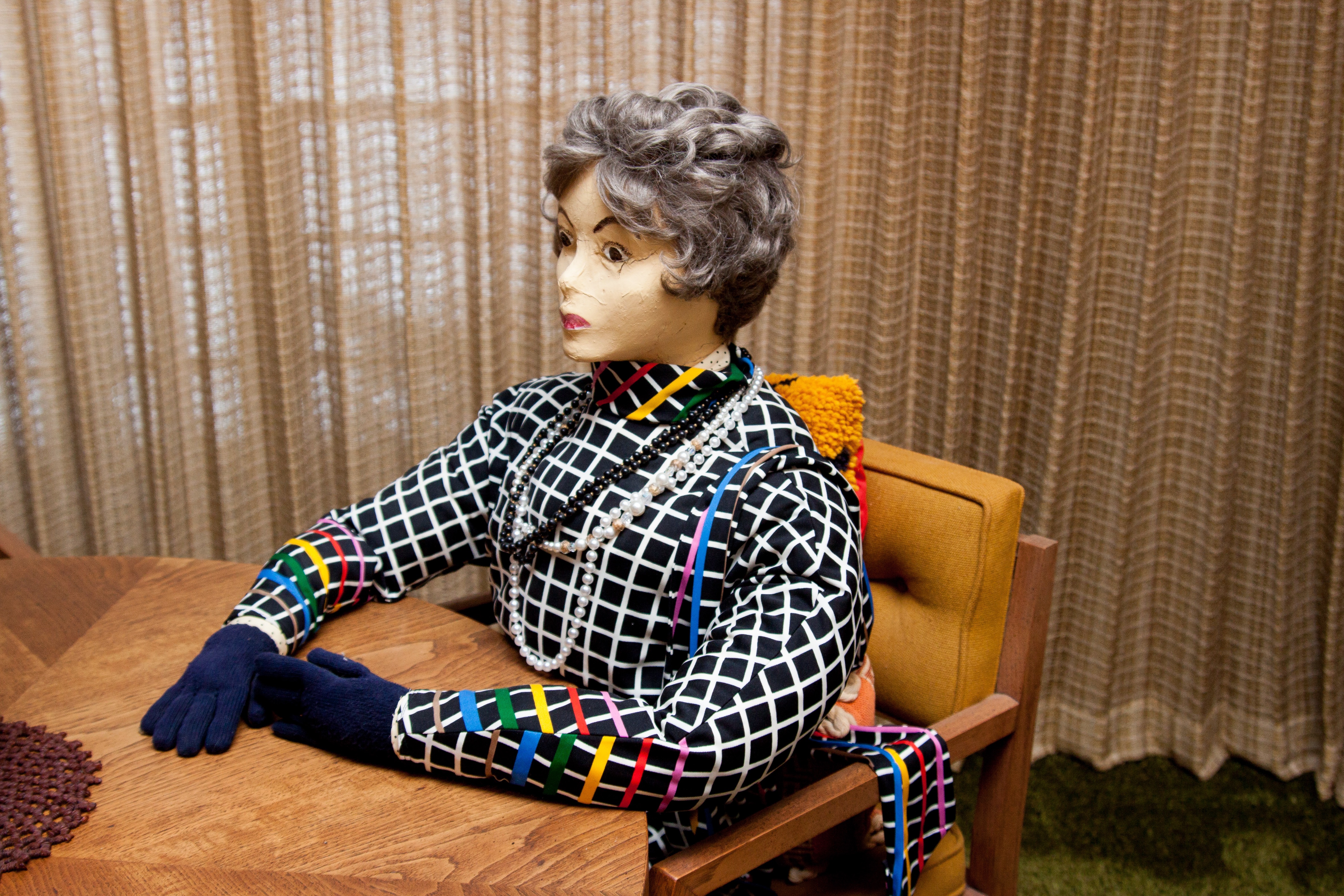 The Story of Tilly: Still Turning Heads After All These Years

One of the most fulfilling and satisfying aspects of my life as a Professional Organizer is coming in contact with so many wonderful people and hearing about their interesting life experiences. The life experiences of my clients often influence my own life in many ways, sometimes serious, sometimes humorous, and often heartwarming. One of my favorite examples on the humorous side, as well as heartwarming, is the story of Tilly.

I first met Tilly back in 2013. I was on the first of many visits to a client, Ralph, who I am fortunate to now call a dear friend. The first time I visited Ralph’s home, I was startled and confused upon seeing Tilly, but I held myself back from asking any questions. Looking astute and comfortable, in her up-right seated position, Tilly was placed in the far right corner of the vaulted great room where I later learned she had sat for the last 16 years.

After a few months of work resulting in noticeable progress, Ralph was kind enough to agree to pose for some pictures with me as part of my advertising efforts. My good friend Terry, a professional photographer accompanied me on a visit to Ralph’s home and that is when I learned more of Tilly’s story. I still “kick myself” for not using the simple, nonjudgmental yet effective, statement that Terry used: “Tell me about your friend.” Ralph replied, “Oh, that’s Tilly, she was made for my father-in-law by my wife’s sister after their mother died. Interesting, I thought.

Terry took this photo of Tilly in her customary spot. 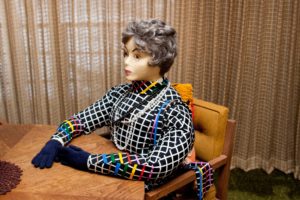 I later learned a few more details. Ralph’s sister-in-law Gloria created Tilly for her father, George, after his wife, Mary, had died in 1987. Gloria thought her Dad needed a companion. Tilly’s core is made of styrofoam peanuts and her head is plaster. She accompanied George on car rides and dances at the retirement home where he lived.

Tilly and George at Ralph & Pat’s home. (notice how “young” she looks) 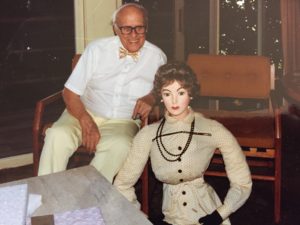 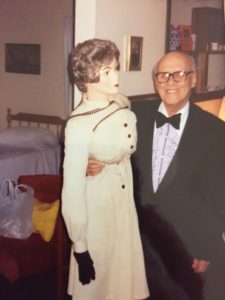 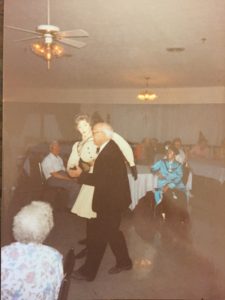 George and Tilly at the retirement center.

I was hired by Ralph to assist him with cleaning out the house after his dear wife, Pat, died in the summer of 2013. We began the journey by combing through items in the basement followed by the office and then the garage. Ralph generously donated a lot of useful furniture and items. The years passed as Ralph and I continued to work together to clean the house. While we worked, Tilly stayed put. She didn’t lift a finger and never moved an inch!

This family is very special to me. Ralph and I enjoyed lunches out together, often after we finished a significant organizing project. Over about the span of a month, we organized his vast educational DVD collection. I heard about his rowing adventures and many career experiences. He talked about all the parties that he and Pat used to have. He shared his visions to improve his home for the next family to enjoy. I thought it was great that he got an 80-inch television to entertain his friends during the Super Bowl.

Fast forward to the summer of 2016. The time came when Ralph decided to leave the home he built in 1968 and move to Florida to be near his daughter and grandson. One of the many questions that needed to be resolved was what would Tilly’s fate be? She didn’t go on the moving truck to Florida. After all, Tilly wasn’t “made” for Ralph.

As a Professional Organizer, my role was to assist this family with dismantling more than fifty years of their personal belongings coupled with built up “stuff”. Their house, built in a style called “Mid-Century Modern, was the most unique houses in which I had ever worked. Most of the items matched the house’s uniqueness and 1970’s flair. It is fortunate that I know the crew from The Bombshelter Store in Akron. They not only buy these types of items and have an incredible appreciation for the style but more importantly they care about the stories behind the items.

During the time we worked together at the house and up until their departure, Ralph’s daughter, Mary Kay, and grandson, Nathan, and I had discussions about what to do with Tilly. We offered her to two separate antique store owners. They claimed they had no room for her. Kevin and Chris from The Bombshelter Store came to purchase items and we offered Tilly to them. Kevin said she wasn’t the right feel for his place. (Later he admitted that she scared him.)

After several days of work, the house was empty of all the personal belongings and the majority of the furniture and funky accessories, went to The Bombshelter Store. It was time to have the realtor photograph the house and put it on the market. Of course, Tilly could not be sitting in the house ready to greet prospective buyers, although the thought crossed our minds. Where would I stash her? Ralph’s Cadillac was sitting in the garage. It was one of the last things on my list to sell. The Cadillac’s trunk seemed like the perfect place to hide Tilly as I finalized the preparations to put the house on the market.

Tilly and me one of the remaining pieces of furniture and sharing a glance. (taken by the realtor). 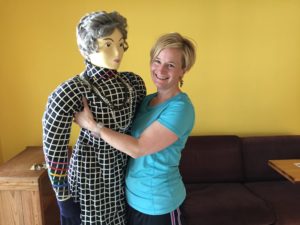 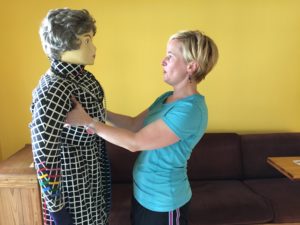 After another week I was reviewing the tasks that still needed to be accomplished to complete the work for this family. Selling the Cadillac and finding Tilly a home were at the top of the list. Before I began to advertise the car, I went over to the house to start it up. It didn’t start. After calling roadside assistance, we arranged a time for the Cadillac dealer to send two people over to jump it and drive it back to the dealer to do a complete check. My husband and I pull up to the house at the same time as the auto techs. They get the car started and then it hits me! Tilly is still in the trunk! My eyes got wide and I go closer to the trunk. My husband and I shared an awkward look that was noticed by one of the auto techs. He then asked, “What’s wrong? Is there a dead body in the trunk?” My husband replied, “Not exactly, but you’re on the right track.” I couldn’t find the words to explain the very complicated situation as the whole story flashed before my eyes. So, I just opened up the trunk and tried to explain in a couple sentences who Tilly was and why she was in the trunk. I wish I could have taken a picture of the looks on their faces. Needless to say, I am sure the entire Cadillac dealership staff was treated to an interesting story that day.

Tilly in the trunk of the Cadillac. 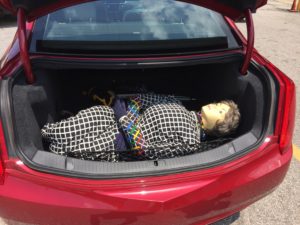 Another week went by and I still hadn’t found a home for Tilly. I was becoming a bit desperate since I took this responsibility very seriously. I decided to make one more call in my effort to find Tilly a home. It was one of those calls that in retrospect I will always remember exactly where I was (a paper recycling dumpster). I called Kevin, the owner of The Bombshelter Store and said, “Kevin, I would like for you to accept Tilly as a gift, I think she belongs there.” He so kindly explained how it wasn’t a good idea and that she scared him and he would “dispose” of her if I needed him to do so. That would not be ok with me. I actually got sick thinking of putting her in a bag and throwing her away. The last idea he came up with was to pin a note on her that read “Welcome to Salvation Army” and then leave her at the Salvation Army donation drop off. We went on for about ten minutes trying to problem solve. I hung up the phone disappointed that Kevin wouldn’t accept her.

I was ready to begin meeting prospective buyers for the Cadillac so Tilly couldn’t sit in the garage, and leaving her in the Caddy might generate some awkward moments if a buyer decided to pop the trunk. I thought bringing her to my home would be a good temporary option. I startled my husband by placing Tilly at our kitchen table while he was out running errands. He later commented that Tilly did not have a preference for which section of the newspaper she liked to read first.

My husband Jason and Tilly at our kitchen table. 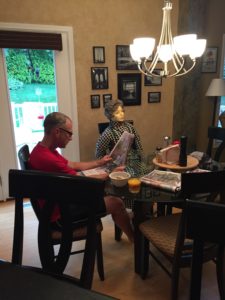 Another week went by and I had to make a stop into The Bombshelter Store to drop off items from another client. I ran into Kevin’s colleague Chris and shared with him the progress in Ralph’s house and that I still needed to find Tilly a home. He said, “You should bring her here!” Clearly, he didn’t remember Kevin’s reaction to Tilly or know that he already nixed the idea. He went on to say that we could put Tilly is his office chair and really freak him out! We began to scheme and plan all the places Tilly could sit in the store and how she would really be at home amidst all the old stuff AND things from her old home. We decided I would deliver her the following week at an early hour so we would beat Kevin’s arrival. It was a brilliant plan. Better yet, not mine this time- it was Chris’s plan! So how could I be blamed?

Tilly ready to go into her new home. 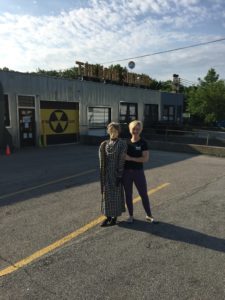 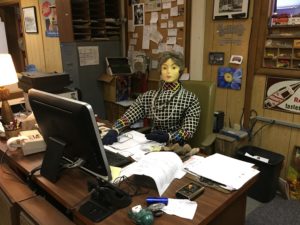 On the day of Tilly’s arrival, Chris filmed Kevin’s reaction to his new coworker. Kevin’s joyful gait into his office screeched to a dead halt when he saw her perched in his chair. The stunned look was followed by “I’m going to kill her.” Not sure if it was Tilly or me he was talking about.

Kevin entering his office and seeing Tilly at his desk. 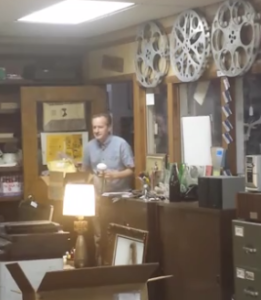 It’s been three weeks and I have visited Tilly once.

She was having tea in the kitchen, so I decided to join her. 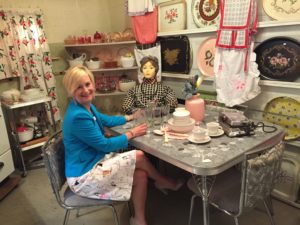 Before I left, she moved to the tiki bar. 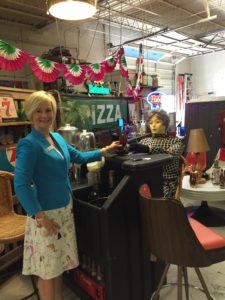 I get frequent photos of her adventures. Comments from Chris include positive customer reactions and grunts from Kevin. Chris also mentioned “She is starting to pick up bad habits here.” 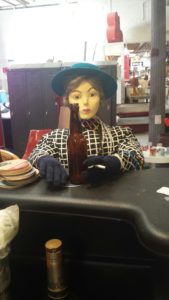 Tilly at the bar with a beer and cigarette.

“I came in this morning and found her sleeping.” -Chris 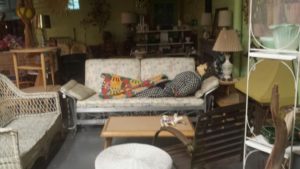 “Everyone keeps asking me how she is getting moved and I’m not saying anything.” –Chris 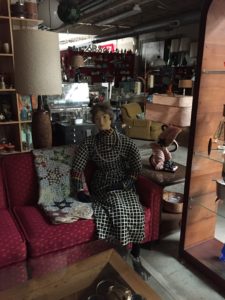 “She is our best employee, she never talks back and the customers love her!” – Chris 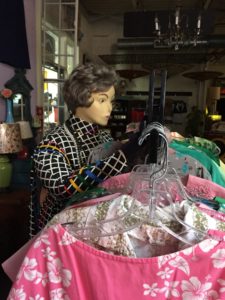 Getting some screen time. 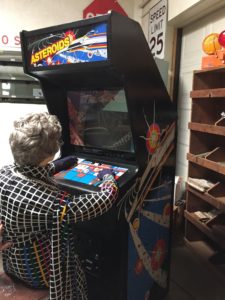 Tilly relaxing outside the camper. 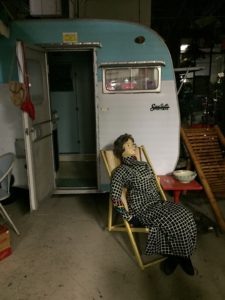 Getting ready to have her hair done. 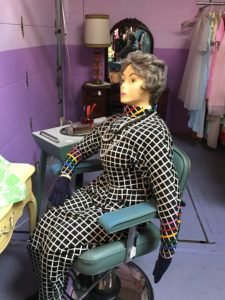 Looking pretty comfy in a chair from her old house! 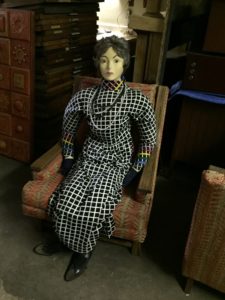 Looking back on this experience, I am so happy that I was able to support Ralph and his family in this transition. Along the way I was able to sell or donate many of the items accumulated in 50 years of living in the same house. Although finding a home for Tilly was a great challenge, I’m happy to know that she will continue to turn heads and bring smiles to people’s faces for years to come.